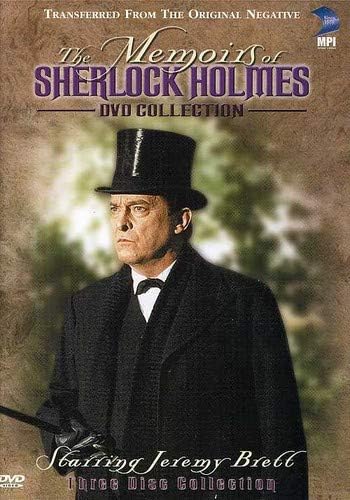 Jeremy Brett ended his riveting run as Sir Arthur Conan Doyle's famous sleuth in "i"The Memoirs of Sherlock Holmes (1994), the final set of episodes in the long-running Granada Television series. In "i"The Three Gables, an old widow receives a suspicious offer of a large sum of money to move out of her depressing mansion and leave absolutely everything behind. Holmes looks into this strange proposition and comes face to face with an enforcer and powerful pugilist, who Holmes cuts down to size with verbal agility. This adaptation may, in all honesty, be an improvement on Doyle's original story. The Dying Detective features Brett in a particularly strenuous and emotionally compelling performance as the Great Detective. Following his uncharacteristically provocative threat to expose a murderer, Holmes becomes mortally ill and delirious. Brett, who was actually suffering from cardiac problems at the time, certainly looks the part of the doomed hero, and his urgency in the role is haunting and poignant.

With Dr. Watson (the also excellent Edward Hardwicke) absent from The Golden Pince-Nez, Holmes is joined by his brother Mycroft (Charles Gray) in an investigation into the murder of a secretary to a chain-smoking, invalid professor. Gray's amusing, inscrutable performance helps supplement that of the valiantly struggling Brett, whose considerable health problems a decade into the series are well known to his devoted fans. "i"The Red Circle draws upon facts related to a one-time, secret Italian terrorist organization. Holmes and Watson investigate a mysterious lodger who tells Holmes of her ties to the Red Circle and of her efforts, along with those of her missing husband, to break free of the Circle's long arm of revenge.

The ailing Brett largely stepped aside for The Mazarin Stone, a radical reinvention of the Doyle story, which was based on a one-act play also written by Doyle and performed in 1921. Instead of Holmes solving the crime, this time it is his brother, Mycroft (Gray again), ably assisted by Watson. (Sherlock does show up from time to time in a dream-like refrain, thinking through some knotty problem in a moonlighted garden.) Despite the absence of Brett from the main proceedings, the episode is still fun to watch, if largely out of curiosity to see Mycroft in action.

Controversial upon its first publication in 1893, The Cardboard Box confronts some nasty consequences of adultery. Holmes and Watson link the grisly mailing of two severed human ears with a complicated love triangle. Holmes, an expert in ears, naturally, has no problem with the mystery of where they came from. But toward what end mortals pursue "this circle of misery, violence, and fear" is another question. Though still ill at the time and at the end of his Holmes career, Brett gives a focused, remarkable performance while Hardwicke lends strong support. --Tom Keogh

Jeremy Brett and Edward Hardwicke return for their final bow in THE MEMOIRS OF SHERLOCK HOLMES. Closing out the long running Granada series, Holmes and Watson are back on the case with six more arduous mysteries to solve. The ailing Jeremy Brett completes his portrayal of the Great Detective in style and Holmes' brother Mycroft plays a crucial role in the series. Episodes: The Three Gables, The Dying Detective, The Golden Pince-Nez, The Red Circle, The Mazarin Stone, The Cardboard Box