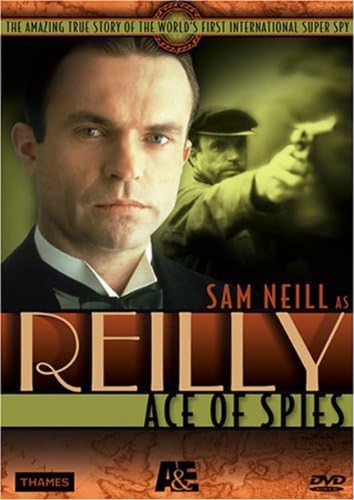 Reilly: Ace of Spies is a thrilling dramatization of the fantastic life and exploits of Sidney Reilly, arguably the first modern secret agent and a complex, often unfathomable individual who invented his very name and identity. Sam Neill has never been better as the former Sigmund Rosenblum, an Odessa-born Jew who becomes a freelance spy for the British at the dawn of the 20th century. Calculating, ruthless, and more certain of his own counsel than the wisdom of his superiors, Reilly (he changes his name by the end of the first episode, "An Affair with a Married Woman," to obscure his personal history) can't help but remind one of a particularly determined James Bond. Reilly's reputation as a womanizer--not entirely deserved, but then none of his associates can quite figure out his thriving love life--adds to this historical figure's Bondian mystique.

In other respects, Reilly's version of espionage is far more complicated, and has greater historical repercussions, than that of Fleming's superspy. The first half of the 12 episodes in this set concern Reilly's daring work ascertaining and even securing the West's access to Middle East oil and, looking ahead to Russia's possible rise as a major power, determine the extent of that country's oil reserves. At the same time, Reilly always has one eye trained on ethically ambiguous opportunities to accrue wealth or play one friendly interest against another. The oil mission leads him from virtual house arrest in the foothills of the Caucuses (where Reilly sleeps with the young wife of an aging preacher as cover for his escape, leaves her to be arrested, then later marries her) to Port Arthur in China (where he clears the way for British allies the Japanese to invade) to France (where Reilly competes with the Rothschilds over Persian Oil concessions). The latter episodes focus on Reilly's extraordinary attempt to overthrow the Bolsheviks following the Russian revolution, barely escaping St. Petersburg after a botched attempt to assassinate Lenin and later risking his life by returning and advocating the killing of Stalin. Throughout this ever-changing drama, the series' writing is a marvel of historical fact and intriguing speculation about Reilly's whereabouts, exploits, and private passions. The supporting cast is superb, including David Burke as Stalin and Tom Bell as Russia's secret police chief Dzerzhinsky. The series was co-directed by Martin Campbell, who took on Pierce Brosnan's first assignment as 007, GoldenEye. --Tom Keogh

At the turn of the 20th century, one remarkable man single-handedly tried to alter the course of history. Cold, ruthless, enigmatic, this Russian-born British agent radically transformed modern espionage techniques and set the mold for a new kind of secret agent-the super spy. REILLY: ACE OF SPIES is the thrilling, suspenseful dramatization of the real-life adventures of Agent ST-1, aka Sidney Reilly, the inspiration behind Ian Fleming's James Bond. Shot in glorious period detail, one heart-pulsing mission after another captures the arc of Reilly's brilliant career. From stealing top-secret Russian oil information to a near overthrow of the Bolshevik Revolution to his final capture by Stalin's forces in 1918, Reilly's exploits are at times so daring and reckless it's hard to believe it's history and not fiction. Starring Sam Neill (Jurassic Park, The Hunt for Red October), REILLY: ACE OF SPIES includes all 12 original episodes on DVD for the first time, and features a bonus documentary examining the final, mysterious days of this legendary figure. DVD Features: "Life of Reilly: Superspy" episode from Aamp;E's acclaimed Vanishings series; Interactive Menus; Scene Selection