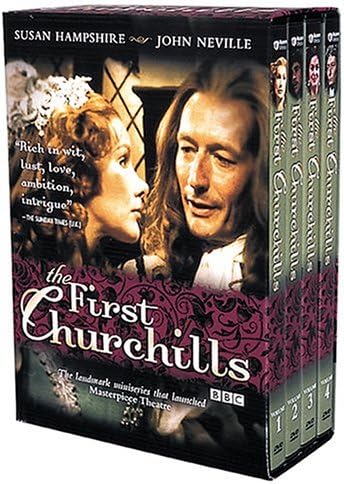 PBS's "i"Masterpiece Theatre began business in 1971 with the American premiere of an engrossing, 12-part BBC series, "i"The First Churchills, inspired by Sir Winston Churchill's biographical writings about 17th-century ancestors John Churchill and Sarah Jennings. Besides being a painless way to learn a few things about the revolving-door monarchy of the House of Stuart, The First Churchills is written with a stately air though its story flows like a steady stream of fresh gossip. A viewer needn't feel guilty about being entertained by intrigues at the royal court while listening to screenwriter's Donald Wilson's elegant and uplifting dialogue, rich in civility and courtly asides.

John Neville (The Adventures of Baron Munchausen) and Susan Hampshire (lauded for her earlier performance in The Forsyte Saga, a British series that helped launch public television in America) play John and Sarah, who meet in the court of Charles II (James Villiers) and defy family and friends by marrying for love instead of family fortune. (Neither has any money.) John, a military officer who built much of Charles's army and never lost a battle, and Susan, an aide and confidante to the Duchess of York, are trusted figures in the king's circle. But as with everyone around them, they are jostled by political and religious forces following the death of Charles, including anti-Catholic sentiments that drive the king's stubborn successor, James II (John Westbrook), to Ireland and see the latter replaced on the throne by William, Prince of Orange (Alan Rowe), and his vindictive wife (and James's daughter), Mary (Lisa Daniely). With a European war raging and British soldiers and resources mishandled by amateurs, a restless John is sidelined and even briefly arrested due to royal paranoia; meanwhile, Sarah's close friendship to the future Queen Anne (Margaret Tyzack) yields numerous dramas on its own. The First Churchills is really about a tumultuous period in English history which saw strains between Parliament, the citizenry, and the monarchy come to a head, several times over. The story of John and Sarah's survival and deep regard for one another offers a perfect, reassuring line to follow through all the epochal raucousness. Neville and Hampshire bask in their characters' good-humored intimacy and level-headedness while madness whirls all around. --Tom Keogh

Based on Sir Winston Churchill痴 biography of his ancestors, the first Duke and Duchess of Marlborough, this classic BBC miniseries is a tender love story played out amid the intrigues of the 17th-century English court.

At a time when most marriages were made for money and position, Sarah Jennings and John Churchill married for love. And their love lasted throughout their long lives spent at the epicenter of political power in England. He was a military genius who never lost a battle. She was the intimate friend of a princess who later became queen. This addictive drama follows them from their budding romance in the bawdy court of King Charles II through five decades and five monarchs from the tumultuous House of Stuart.

The popularity of The First Churchills helped establish Masterpiece Theatre as a venue for the best of British drama. Starring John Neville (The Adventures of Baron Munchausen) as John Churchill with Susan Hampshire (Monarch of the Glen, The Pallisers) in an Emmyｮ-winning performance as the tempestuous Sarah.

DVD SPECIAL FEATURES INCLUDE an exclusive interview with Susan Hampshire, photo gallery, cast filmographies, and full-color insert with a sampling of the real love letters of Sarah and John Churchill, glossary of historical figures and terms, and House of Stuart family tree.