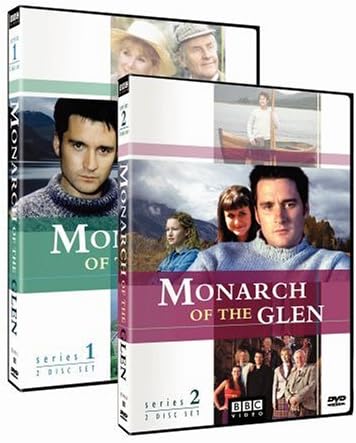 Gorgeous to behold, slow to reveal its full charm and intelligence, Monarch of the Glen is not just for Britcom fanatics. Adapted and updated from the so-called "Highland" novels of Compton MacKenzie (author of Sylvia Scarlett), Monarch concerns the crisis of Archie MacDonald (Alistair Mackenzie), a London restaurateur all set (with his girlfriend Justine, played by Anna Wilson-Jones) to open a hip new eatery when he is interrupted by an emergency call from his home in the Scottish Highlands.

There is no emergency, as it turns out, just a gambit by Archie's mother, Molly (the radiant Susan Hampshire), to effect a reconciliation between her son and his cantankerous, relentlessly bitter father, Hector (Richard Briers). The reason: Archie, much to his surprise, must legally assume Hector's longtime role as Laird of Glenbogle, the MacDonalds' 400-year-old, financially strapped 40,000-acre estate. Despite their lengthy estrangement, Hector needs Archie to save the family's honor and assets.

Monarch takes a couple of delightful episodes to introduce these good people and establish story particulars and conflicts. But depth and emotional resonance arrive by the third episode (the MacDonalds have their share of repressed, unspoken old agonies) and remain through the last episode's cliffhanger ending.

The second series picks up precisely where series 1 left off. Young Archie has finally taken to his immense responsibility with seriousness of purpose and no little family pride. Father Hector has gracefully accepted his own change in fortunes but now runs little ploys to maintain a semblance of aristocratic privilege. (In one near-slapstick episode, Hector and his old friend Kilwillie, played by Julian Fellowes, try to hide a valuable barrel of malt liquor from Archie, who is trying to profit from every MacDonald asset.) Archie's efforts to keep Glenbogle solvent include turning the estate into a sprawling museum and renting the place out for weddings. The tricky bit is that Glenbogle is also a home and touchstone for the MacDonald's appealing staff and friends, and there will always be someone upset about changes in the status quo. Monarch continues to be as much about Duncan, Lexie, Golly, and Katrina (whose dodgy, romantic ambivalence toward Archie wears a little thin but finally settles into a promising groove). The radiant Susan Hampshire (The Forsyte Saga) has more to do in this set of stories and thus shines brighter as Archie's intriguing mother. Equally lovely are spectacular views of Highlands scenery: amazing castles, romantic vistas. One wants to stay forever. "i"--Tom Keogh

Meet handsome Archie MacDonald, a reluctant young Scottish laird torn between his trendy London life and the call of his wild Highland ancestry. You'll be seduced by breathtaking scenery, marvelously original and amusing scripts, and eccentric, thoroughly lovable characters. This pack contains all 16 episodes from Series 1 and 2 of the heartwarming comedy-drama.